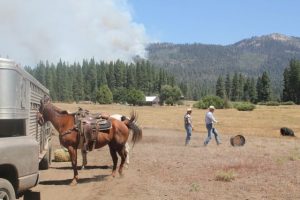 Sonora, CA — New fencing will soon go up in areas where the Rim Fire flames took a toll. The Stanislaus National Forest has received $525,000 in funds to repair and replace range infrastructure damaged or destroyed by the megafire.

In all, 14 grazing allotments permitted to 7 ranchers were affected by the blaze. The money will pay for more than 30 miles of Forest Service range fence that will be replaced along with twelve livestock water troughs.

Forest Officials say a top priority will be getting fencing back in the next couple of weeks where cattle graze near the burned areas.  Also, along the shared boundary with Yosemite National Park to keep grazing cattle out of the Park.  However, Forest Officials say before fences can be replaced, burned trees that could fall across fences and the roads must be removed.

“Some areas will need to wait until after the Recovery Project has removed the trees”, said Crispin Holland, Forest Biologist. “We cannot rebuild a fence if logging activity and equipment will just destroy it. In areas where no salvage is planned we will begin dropping hazard trees and rebuilding as the season progresses”.

The forest’s hazard tree salvage is expected to begin early this summer.