Full Slate Of Candidates In Sonora 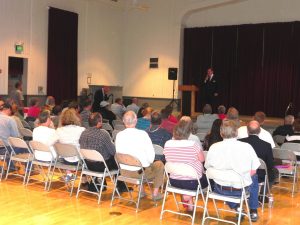 The Tuolumne County Farm Bureau hosted a candidates night event at the Sonora Opera Hall. All the candidates in the U.S. House race expressed displeasure with the status quo in Washington D.C.

The seat is currently held by Republican Tom McClintock. “Ronald Reagan used to say that government is not the solution to the problem, it is the problem,” the Congressman said. “It has been obstructing our ability to prosper from our resources here throughout the Sierra, and the policies in Washington have been absolutely devastating to the economy.”

McClintock spoke about the importance of his being on the House Natural Resources Committee, as Natural resource issues are front and center in the Mother Lode.  McClintock is also on the Budget Committee.

Republican challenger Art Moore spoke about his military background and success in the private sector. He said it is one thing to give good speeches, but another to show results. “To get things done, you’ve got to be able to build coalitions,” said Moore. “And to get the best ideas you’ve got to be able to talk with everyone in the district regardless of what party they represent. Bringing together everyone’s ideas will ultimately result in a better solution in the end.”

Challenger Jeffrey Gerlach declines to state a political party, and expressed displeasure with both Republicans and Democrats. “The two-party system is broken, and we need to have another choice,” he said. “People are leaving the parties, and I’m one of them. We need to have another option because what’s going on now does not work.”

The night also featured the first chance to see the two candidates together running for the Senate District 8 seat. Republican incumbent Tom Berryhill stated, “The way to improve the current status of Tuolumne County is through more jobs. The water bond also looms big as we move forward, and I’m working on all fronts.”

Berryhill is challenged in the race by Fresno Democrat Paulina Miranda. She spoke about the population drain in the foothills. “I think it is time to turn and try to help building better jobs, better education for here locally, so that they can come back and be here with their families.”

Some of the candidates that do not have any competition this June were also on hand to give speeches. They included Auditor-Recorder Debi Bautista, Tax Collector Shelly Piech, Superintendent of Schools candidate Margie Bulkin, and Sheriff Jim Mele.

The event was moderated by Sasha Farkas of the Farm Bureau.