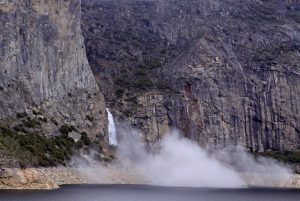 Miyako was Thursday’s KVML “Newsmaker of the Day”

The rockfall happened about 1:30 p.m. on Monday March 31st just east of Wapama Falls above the Hetch Hetchy reservoir.

Thankfully, no one was injured. That portion of the Park is located in or near the area that had just reopened to general public. It had been closed since last year’s Rim Fire.

Because of the rockslide, the Rancheria Falls trail is closed just east of the Wapama Creek footbridges for safety and because boulders are preventing access beyond Wapama Falls.

The estimated 16,000 tons of rock fell from about 500 feet above the base of the cliff. The rocks crushed trees and created a small cloud of dust. Many of the large boulders tumbled into the reservoir. Roughly 400 feet of the trail was destroyed in the main area of impact.

However, according to Miyako, the trail to Rancheria Falls just after Wapama Falls will be closed until further notice.