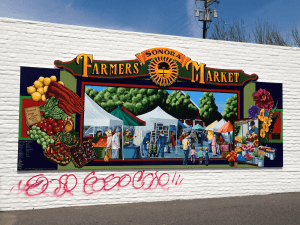 Chief Stinson says,   “Apparently the graffiti artist had some type of conscience and did not attack the actual mural itself. They actually painted underneath the mural.”

Stinson adds he does not know what the letters say, but police have determined they are not gang related. An investigation is ongoing, as police have no suspects at this time. If you have any information regarding the vandalism, call the SPD.