Hats Off To Volunteers 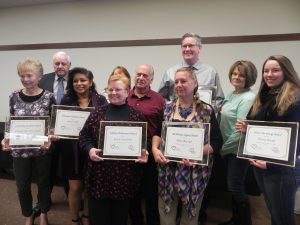 Sonora, CA — Volunteers were shown gratitude for their good deeds and rewarded.  Sierra Nonprofit Services held its “Hat’s Off to Our Volunteers” luncheon Friday.  The Rim Fire was a theme of the event with two winners having helping firefighters during the devastating blaze.

Ron Hamilton won the “Extra Mile Award”.  During the Rim Fire, he fed firefighters dinner for eight days serving around 1,800 meals from his home kitchen.  “It’s a huge honor,” says Hamilton, “It was kind of weird getting an award for something we thought was important to do.  We fed them simply because it gave us something to do, to keep busy.   We knew it was important for them to have a nice home cooked meal.”

The group award for community excellence was given to Therapy Dogs International.  During the fire, Stu and Sherry Galka along with others in the group brought therapy dogs to the firefighter’s Tuolumne City staging area.  There to help them relieve stress.

“It was really special,” says Sherry Galka. “When the firefighters came back from fighting the flames the dogs were there giving love and hugs to them. The whole thing was for them [firefighters] to relax and relieve stress, to make them feel at home,” added Galka.

Awards were handed out in six categories.   Five winners were given $500 each to give to a charity or organization of their choice.  $1000 was given to the lifetime achievement winner.  Here are the categories, winners and to whom the cash awards were donated.