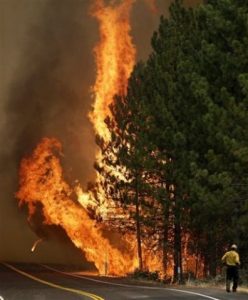 Yosemite, CA — You can once again enjoy Yosemite National Park in its entirety.

Yesterday the Park Superintendent signed the order to lift the closure of the Rim Fire areas. That means visitors can once again walk among the Tuolumne Grove of Giant Sequoias and hit the Hetch Hetchy hiking trails.  However, Park Officials warn visitors to be aware of the potential risks involved including hazardous trees, uneven ground, potential rock fall and debris on trails.

In addition, the fire restrictions enacted last summer and fall for the Hetch Hetchy area have been rescinded for now.

Park Ranger Scott Gediman noted,   “We’ve been able to lift those, but even though we’ve had some nice rain and snow over the past few days we still are in drought conditions.  We are anticipating fire restrictions or a complete ban later on in the summer.”

The Rim Fire burned around 77,000 acres within Yosemite National Park.