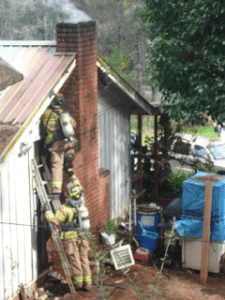 Glencoe, CA — Officials put-out a chimney fire in Calaveras County and stopped it from extending to other portions of the home.

The fire started late yesterday afternoon in the 16000 block of Highway 26 in Glencoe. A report from the Central Calaveras Fire and Rescue Protection District states, “Early recognition of the problem by the homeowner allowed a quick response by firefighters. Upon arrival, firefighters found a fire actively burning in the void spaces surrounding the fireplace chimney. Firefighters spent several hours removing portions of the roof, ceiling, an exterior wall, and the fireplace hearth to extinguish the fire.”

The fire district reports that damage was confined to the area immediately surrounding the chimney. Other fire agencies that responded include West Point Fire, Mokelumne Hill Fire, San Andreas Fire, and CAL Fire.