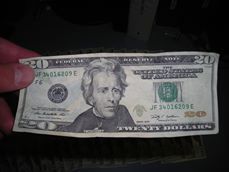 On Wednesday, Walmart’s manager reported three separate incidents where the bad money had been used at the store.  The first was on Monday around 6:46 p.m.  A 30 to 40-year-old man with a large build paid $240 in counterfeit $20’s for items.  Tuesday the store was hit twice with more fake money.   Around 10:25 p.m. a man with dark hair and a beard bought $300 in purchases with the bad 20’s.  The about 20 minutes later a  woman in her mid-30’s, wearing glasses, with a heavy build and long dark hair spent $480 in counterfeit 20 dollar bills.  Police says she wore a hooded sweatshirt and concealed her face from security cameras.

Sonora Police Chief Mark Stinson says,   “All the bills looked and felt authentic. However, they lacked watermarks and the embedded security strip. Most of the bills also had the same serial number and the boarders were uneven. Some type of scent had been applied to the fake bills in an attempt to make them smell like real money.”

Chief Stinson notes there is no surveillance video being release because of its poor quality. However, he says they are trying to grab some usable photos of the suspect from that footage.

In addition, SPD reports there have been several incidents involving a white female trying to pass fake 100 dollar bills at downtown Sonora businesses this week. Luckily, clerks have spotted the fakes.

Chief Stinson asks that anyone with information regarding these incidents contact the Department at 532-8141.