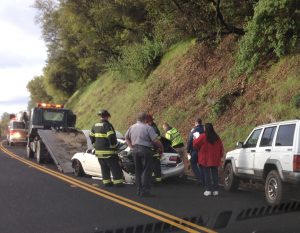 Sonora, CA — The CHP reports speed was a factor in a three vehicle crash in Sonora.  The accident happened at 8 this morning at the Highway 49 and Columbia Way intersection.

The CHP reports 58-year-old Danny Moore of Folsom was driving a 2006 Ford Van when he failed to notice traffic in front of him had stopped.  Moore rear-ended 27-year-old Trevor Ambler of Columbia driving a 1992 Honda Civic, who in turn smashed into the back of 44-year-old Tina Gomes of Sonora driving a 1990 Jeep Cherokee.

The CHP says a white truck not involved in the crash had stopped to make a left turn onto Columbia Way.

Ambler, whose car was sandwiched in the wreck, complained of neck and back pain.  He was taken to Sonora Regional Medical Center.