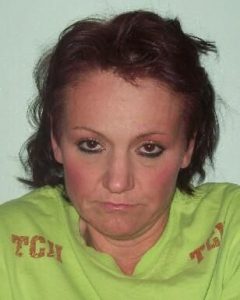 Sonora, CA — Four people were arrested after two stolen vehicles were found in the area of Serrano Road in East Sonora.

Tuolumne County Sheriff’s Deputies had just finished helping the CHP recover a stolen vehicle out of Calaveras County, and decided to do a patrol check around the area. The deputies soon spotted the second stolen vehicle parked in front of a home in the 19000 block of Serrano Road.

44-year-old Janee Michelle Johnson of Tuolumne County, and 37-year-old Sunshine Nichole Nordstrom of Calaveras County, stepped out of the home and started to open a door to the stolen vehicle. Deputies approached the two women and charged them with possession of stolen property.

While the arrests were taking place, the front door of the home slammed shut. Additional deputies were called in and created a perimeter around the home. A search warrant was quickly obtained, and deputies went inside and arrested two additional men. They are 27-year-old Jimmy Blake Terry of Calaveras County and 30-year-old Robert Allen Williams of Tuolumne County.

Both stolen vehicles located were out of Calaveras County. At this point in the investigation it is not definitively known if they are connected.