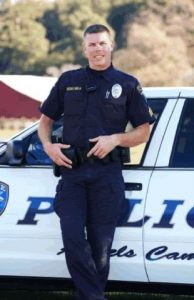 Angels Camp, CA — The Angels Camp Police Department reports that Sgt. Steven Poortinga has returned home and is recuperating from injuries sustained in a vehicle accident over the weekend.

As reported earlier, Sgt. Poortinga crashed at 3:15am on Sunday along Highway 4 near Vallecito Road. He was taken to a hospital in Modesto, and has since been released from medical care.

The Police Department reports that Sgt. Poortinga is a K9 handler, and was on his way home with the dog following his shift. The K9 was taken to a local veterinary hospital and checked for injuries. The PD notes that the K9 was later released from care, and is currently at home with Sgt. Poortinga.

CHP Officer Rebecca Myers reports that Sgt. Poortinga stated that he was very tired, and the investigating officer put in the report that he may have briefly fallen asleep. Sgt. Poortinga was not ticketed for any type of violation.

The Police Department says it is unknown when Sgt. Poortinga and his K9 will return to work.