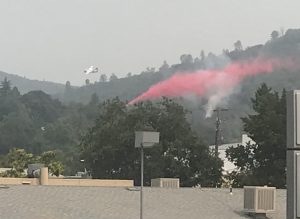 Update at 11:55am: Officials have successfully stopped the spread of a vegetation fire in Sonora. It ignited in the 100 block of Hope Lane. No structures were damaged. It was less than acre, initially estimated to be a 50 x 50 ft. spot. Air and ground resources responded. What ignited the fire is unclear.

Original story posted at 11:45am: Sonora, CA — Officials are on the scene of a vegetation fire in Sonora. It is in the 100 block of Hope Lane.

Officials have asked the residents of one nearby home to evacuate as a precaution. It is less than acre, estimated to 50 by 50 ft. It is visible from downtown Sonroa. Be prepared for activity in the area. Air and ground resources are on scene.