Drugs And Guns Found During Stop 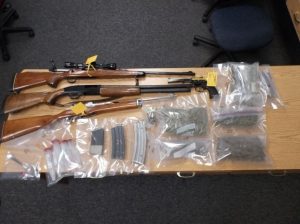 Sonora, CA — Two people from outside the area were pulled over by a CHP Officer near downtown Sonora, and they now face a list of charges.

The CHP reports that 32-year-old Steven S. Noah of San Ramon was driving a Chevy Suburban on Highway 108 just east of Washington Street, and he was pulled over for suspicion of DUI. The officer could smell marijuana inside the car, so a search was quickly conducted.

The two were arrested and booked into Tuolumne County Jail.