K-9’s Get Gifts Of Protection 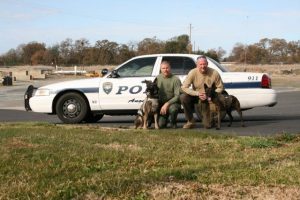 
“This is a fantastic gift,” says Angels Camp Police Chief Todd Fordahl. “They’re a fairly expensive piece of equipment because they are custom made for the dogs. Not only are they bullet, but they are stab resistant as well.”

The vest cost about $3,500 each. The vest will not be worn everyday by the dogs. Fordahl says they will only be suited up in situations that call for protective gear.