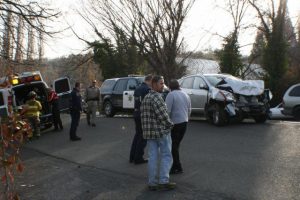 
The wreck happened at two Friday afternoon between Sonora and the Columbia turn-off causing traffic delays. Four vehicles were involved in the wreck.

The CHP reports 66-year-old Peter Mitsopoulos of Sonora driving a 2000 Jeep Cherokee was stopped in the northbound lane of the highway to make a left turn into a driveway. Behind him, 30-year-old Matthew Bills of Sonora was driving a 1993 Ford truck and was slowing down. The CHP says that is when 86-year-old Mary Czito of Jamestown driving a 2012 Nissan Rogue going about 45 mph smacked into Bill’s truck.
The collision caused the front of the truck to smash into the rear of the Jeep. The CHP says Czito’s Nissan then hit the trucks back end again and rolled backwards into a 2010 Ford Fusion driven by 77-year-old Kathleen Hazel of Sonora.

Three victims were taken by ambulance to Sonora Regional Medical Center. Bills and Czito complained of pain to their neck, back and head. A passenger from Texas in Czito’s car suffered a broken arm. The CHP reports alcohol and drugs do not appear to be a factor in the accident.