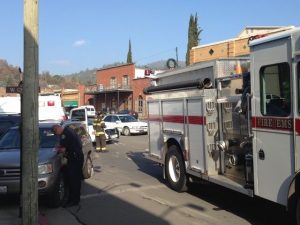 Sonora, CA — One man was injured when an SUV smashed into a building in downtown Sonora.

The two vehicle crash happened just after one this afternoon at the intersection of South Washington Street and Church Street. The Sonora Police Department reports the driver of a Toyota Highlander was stopped on West Church Street and was trying to cross Washington. He told officers he did not see a Chevy Tahoe heading southbound on Washington.

Sonora Police Chief Mark Stinson says, “Both the vehicles collided in the middle of the intersection and the force of the impact pushed both vehicles onto the sidewalk and one into the building.”

The Tahoe hit the corner of The Bank of Stockton building. No one inside the building was hurt. The driver of the Highlander was taken by ambulance to Sonora Regional Medical Center complaining of leg pain. The other driver was not injured.

Traffic was stop and go for more than a half an hour while crews cleaned up the debris and the two SUV’s were towed away.