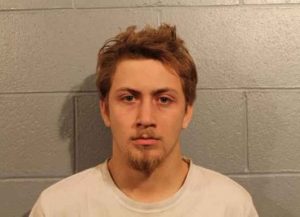 21-year-old Jason David Anthony Roberts was arrested and taken to Calaveras County Jail. The crime was carried out in Angels Camp and the victim was a family acquaintance of Roberts. The Angels Camp PD is not releasing any additional information about the minor, but the charges indicate the victim is between the ages of 10-14. The Angels Camp PD reports that Roberts has confessed to sexually assaulting the victim.