No Resting For The Calaveras Arts Council 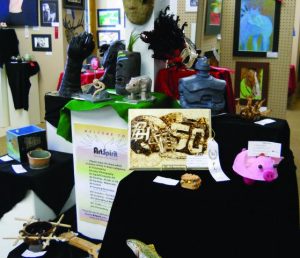 The Calaveras Arts Council remains busy during this time of the year.

Founded in 1981, their purpose is to coordinate excellence in the presenting and promotion of the visual and performing arts of all cultures for artists, residents and visitors. The staff is comprised of Genochio, a deputy director and a part-time assistant under the direction of an 11-member volunteer Board of Directors.

To assure that the arts would be an enriching aspect of the area, the Calaveras County Arts Council was organized in 1981 when a County Arts Plan was developed, resulting in the council being accepted as a State-Local Partner with the California Arts Council, a state agency.

In 1983, in the county seat of San Andreas, Calaveras Arts renovated a “quonset hut” building which, for 5 years was used as the office. In 1989 they organized an artists’ cooperative to sustain a gallery/office in Murphys called the Art-Op. In 1990, through county government support, they established their present office/gallery on historic Main Street in San Andreas.

The Council is proud of its’ history of presenting quality performing artists, filling a cultural need.

Currently the Affordable gifts of Art Holiday Boutique is taking place at their main headquarters in San Andreas. This will continue through January 4th.

Additionally, there are plenty of events that are coming up within the next few months, beginning as early as January twelvth with Michela Macfarlane & Cantamos performing at 3pm in Angels Camp, as part of the Ovations series of concerts and events.

For 12 years, the Calaveras County Arts Council presented the Sacramento Symphony at public and children’s concerts. To keep classical music in the forefront, in 1994 they started Calaveras Classics, which became “Ovations” in 2003, a performing arts series to reflect a diversity of music and dance.

The Ovations series takes place at the Bret Harte Theater and will feature a wide variety of perfomers through Sunday March 30th, 2014 (ending with cowboy entertainer Dave Stamey).

The Calaveras Arts Council has many events and fundraisers, which you can learn about on ther website at http://www.calaverasarts.org/

As a private, non-profit 501(c)(3) public benefit corporation, the Arts Council is not directly a part of county government. However, from the County, they do receive annual in-kind rent support. for the office/gallery, for which they are very grateful.