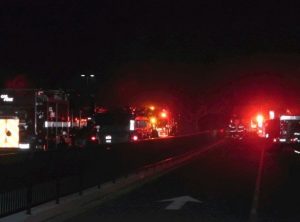 “We have a fire that started in the F building, which has 11 classrooms, so we have fire and or smoke damage to at least 11 classrooms,” says City of Sonora Fire Chief Mike Barrows. “Probably half of those classrooms have significant damage and three or four have major damage.”

Several fire crews started responding to the school at around 9:45pm and some will remain on scene through the night. The damage done to neighboring campus buildings is not immediately known. The F building is connected to the Administrative Offices and another similar building that contains several classrooms. “Right now we’re trying to assess the extent of the damage in the attic and how far it ran down past a breeze way into those second two buildings,” adds Barrows.

Shampain noted it could include moving students to a different area of campus, possibly bringing in portable buildings, or trying to find available space at other locations in the county.
The cause of the fire is under investigation, and it is considered contained, as of 11pm.

“I think this horrible,” added Shampain, who summed up the mood of the various school officials who stopped by the school Saturday evening.