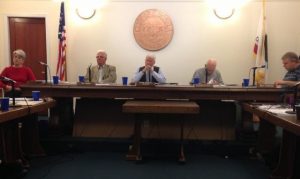 These were some of the main topics at Monday’s Sonora City Council meeting.

The City approved a $35K contract with Development Impact Incorporated to be the environmental consultant for the upcoming Dragoon Gulch Trail Expansion. The city plans to expand the existing trail from the current 32 to 102 acres. Funding for the development of the trail’s Master Plan is coming from a Community Transformation Grant, in which the city received $55K.

The Council was also given a petition signed by several residents in the Morningstar Drive area requesting that the city take action to slow down fast cars. Resident Dan Arnold talked about a recent close call where a speeding car lost control on Morningstar and rolled into a vehicle parked at his house on Cemetery Lane. Had his family member’s vehicle not been parked there, he said the out of control car would have slammed through his house. Two other neighbors came up and echoed Arnold’s concerns. They asked the City to look at options like increased law enforcement or speed bumps.

The Council also directed staff to investigate the legality of the salary and benefits currently being paid to members of the Council. The request came from Councilwoman Connie Williams. State law caps the amount of money councilmembers can receive in a city the size of Sonora at $300 per month. Councilmembers can also be offered city health benefits under state law. Around 2009, during the recession, the City Council dropped the salary of the Mayor to $150 and councilmembers to $125. However, around that time a provision was put into the city’s health benefits plan where council members could opt-out and receive a payment of $350 for an individual, or $400 if their spouse is also under the plan. It was stated at Monday’s meeting that one councilmember is currently enrolled in the city’s health plan, and three receive opt-out payments. Williams questioned whether the opt-out payment, on top of the salary, violates state law because it is over $300. Williams is the only councilmember that does not receive health benefits, or an opt-out, because the council eliminated it for new members starting in 2010. Williams was elected in 2012. The Council voted 5-0 to direct legal counsel to look into the matter.

Also, a report at the end of the meeting from Community Development Director Rachelle Kellogg shed light on what is going into the former Sonora Blockbuster location. A building permit has been requested for Panda Express to be situated in a portion of the building. Another portion of the building would be open for a different business. Kellogg’s report stated that several inquiries have been made, but no plans have been submitted yet for the space.