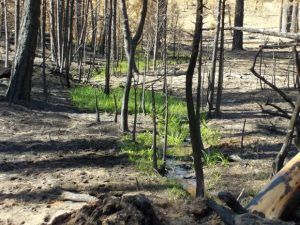 Washington, DC — A bill designed to expedite the harvesting of burned timber from the Rim Fire passed through the House Natural Resources Committee this morning.

HR 3188 will soon go up for vote in the full U.S. House, and if approved, move onto the Senate. It would waive portions of the environmental review process, and reduce the threat of timber harvesting being held up by lengthy legal challenges. After being pressured from some lawmakers in California, McClintock stated this morning he would remove a provision to include Yosemite National Park, keeping the focus to only Forest Service land.

“I do so with the gravest reservations because I feel it would be consigning that side of the fire damage to revert to brush land for several years to come, but I understand the politics of the situation,” he said. “I hope that we can assemble a bi-partisan coalition behind this measure.”

McClintock stated at the hearing that much of the burned timber will start losing its value after a year, and it will become mostly worthless after two years. He estimated that there is nearly a billion-board ft. of timber that was burned in the Rim Fire.