Car VS Bike In Downtown Sonora 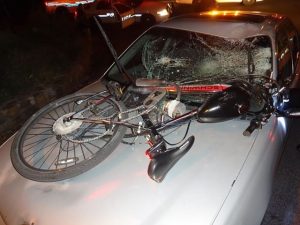 Sonora, CA — Sonora Police report a cyclist suffers major injuries after being hit by a car on Stockton Road. The accident happened over the weekend at dusk. Police report 34 year old Enrico Cocco was riding his motorized bicycle westbound on Stockton Road when he was struck by a car driven by 65 year old Gregory Davies of Sonora. Davies was trying to make a left turn onto Bradford Street in his Chevy Prism and hit Cocco. Cocco was ejected from his motorized bicycle which came to rest on Davies car hood. Cocco suffered major injuries to his head and upper torso in the accident. He was taken by ambulance to Sonora Regional Medical Center. The investigation into the collision is ongoing.


Click here for a map of the accident site.