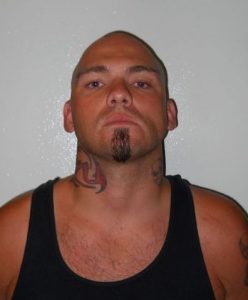 Sonora, CA — A Sonora Police Department officer was hurt while arresting a man that had been punching a telephone pole and yelling at passing vehicles on South Stewart Street.

When officers contacted 32-year-old Michael Didion of Stockton, the PD states that he went into a fighting stance and “challenged officers.” An officer took out a taser gun and ordered Didion to the ground. Didion did as he was told, and was placed in handcuffs. However, he soon resisted the arrest when the officer tried to place him into the patrol car.

Didion fought and broke the finger of an officer. The PD says Didion also caused damage to the patrol car by slamming his head into it. He was eventually taken into custody and booked into Tuolumne County Jail.