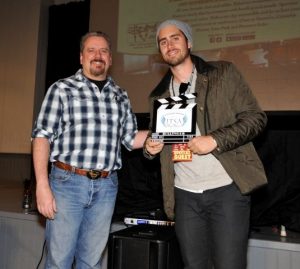 Sonora, CA — Sixty-one films were shown over the weekend at the ITSA Film Festival, and 16 directors were on hand to speak about their work.

2013 marked the 4th year of the event that was created by David and Christina Wilkinson. It kicked off on Friday evening with a Gala at the Sonora Opera Hall. Organizers say that 600 people attended the event over the three days. Workshops hosted by talent agent Carollyn DeVore and screenwriter Bryan Starchman proved to be very popular. The Director that traveled the furthest to the event was Daniel Sarkissian of Toronto. His film Loraine had its world premiere. There was also a stop by the Bay Area Ghostbusters (see photo).

The following awards were handed out on Sunday: