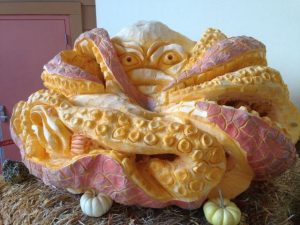 Tuolumne, CA — The Mother Lode is embracing the fall season with pumpkin carving and other festive events.

With Halloween occurring mid-week several annual Mother Lode events have already wrapped up. The Columbia Chamber of Commerce held their annual Illumination of the Jack-O’-Lanterns in the State Historic Park. Sonora’s Trick-Or-Treat Street was a success, as was the 4-H Haunted House. Railtown has been hosting Harvest Haunt Train rides as well. A few local elementary schools will have their Halloween Carnival fundraisers; Twain Harte School’s Halloween Carnival event listing is here, Columbia will have its PTA Carnival on Friday.