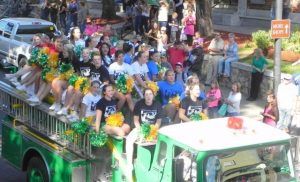 There was hard hitting action on the gridiron in week 7 of the High School Football Season.


The Wildcats racked up the points to roll over Weston Ranch. Sonora won its Homecoming game with a score of 55 to 17.

Summerville also put up plenty of numbers on the score board as the Bears beat the Bret Harte Bullfrogs 49 to 3.

Calaveras won against Amador 21 to 15.

Oakdale beat Sierra in a close game to win its Homecoming against Sierra 24 to 17.