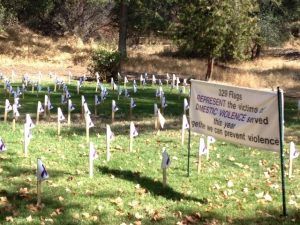 Sonora, CA — Hundreds of flags marking victims of Domestic Violence in the area have motorists doing a double take on Standard Road. October is “Domestic Violence Awareness Month”. The flags were put up by the Center for a Non-violent Community to show the growing problem.

There are 329 flags stuck in the ground to represent the number of victims who have been helped by the center including those who have stayed at the shelter.

“It’s a huge problem in the community and it’s going to take the community to help end this. A lot of people say it’s not their business, but it’s everybody’s business to stop Domestic Violence,” says Carter.