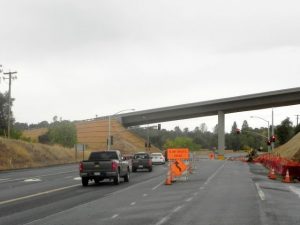 Sonora, CA — If weather permits, Caltrans is hoping to open Stage II of the Highway 108 bypass on November 1st. Also, the total cost for the project has jumped by a million and a half dollars.

Caltrans Spokesperson Angela Daprato says, “The total cost for the project was originally estimated to be $53 million and it has gone up to $54.5 million.”

DaPrato says it is due to unexpected construction costs, which she says is typical with large projects. The Stage II of the Bypass was originally scheduled to open in spring of 2014.

Also the project was allocated $244,000 in new funding this week from the California Transportation Commission. That money will be used for safety improvements.

Stage II of the bypass runs from Standard Road to Via Este Road.