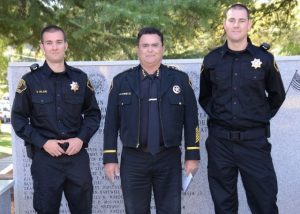 Corrections Officer Justin Teague is originally from Tuolumne and is a former U.S. Navy aircraft mechanic. He served tours of duty in both Iraq and Afghanistan.

Corrections Officer Bret Belshe is from Valley Springs and spent five years as a Captain with the Central Calaveras Fire and Rescue Protection District.

Teague and Belshe were officially sworn in this week, and will now begin their formal training. It will include time at the Corrections Officer Academy.