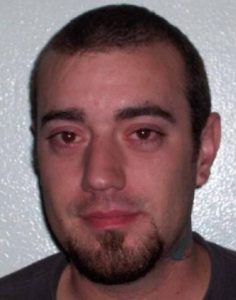 Sonora, CA — A report of a stolen credit card on October 4 led police to make an arrest and revealed several incriminating items.

The Sonora Police Department says a person came to the Police Department to report that someone stole his credit card out of his vehicle while it was parked at Wal-Mart. The victim said the stolen card had been used at numerous businesses in the Sonora area.

Officers reviewed surveillance video from Wal-Mart and some other locations where the stolen credit card was used. They were able to identify two suspects, a male and a female. Officers were also able to identify the suspect’s vehicle as a tan early model Dodge Durango, with stickers on the back window.

Yesterday, on October 9, just after 8:00am, an investigator observed the suspect vehicle southbound on N. Washington Street, near Yaney Street. The vehicle was stopped and the driver was Chad Hilton, 27 of Mi Wuk. The police say that Hilton matches the male seen in the surveillance videos stealing the credit card and then using it.

A search of Hilton’s vehicle revealed: property purchased with the stolen credit card, the victims stolen credit card, counterfeit ten and twenty dollar bills, a large amount of mail with several different individuals names on it, identification cards and credit cards in several different people’s names, (some of which had been intercepted in the mail and not yet activated) and smoking pipes with methamphetamine residue.

According to Police investigation into the incident will continue.