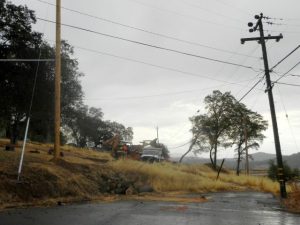 Sonora, CA — You may be wondering what PG & E crews are working on along Mono Way; it is all part of the widening project. Crews are relocating utility lines along the street between Roselyn Lane east to Fir Drive in preparation for the actual construction.


City Administrator Tim Miller says, “When they complete that work we will be working with Comcast and AT&T to move their utility lines from that location to the west. That work will be taking place over the next couple of months.”

In September, Sonora’s City Council put the project out for bids from contractors. Those bids are due October 28th. The project is funded by both the city and county so after both of their project teams review the bids it will come back to the Council to award the construction contract. Miller says that will likely take place early December with construction starting probably in March, 2014. The estimated the cost for the project is around $2.75
million.

Click here for an earlier story with more details on the widening project.