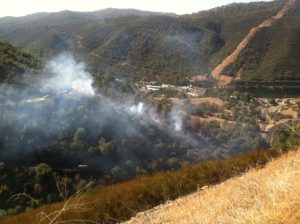 Ground and Columbia air Units began battling a 3 to 4 acre vegetation fire on the east side of the roadway around 10 this morning. The CHP reported that a GMC pick-up truck had flames shooting out of the back camper shell and that ignited several grass fires along the roadway. Cal Fire says those grass fires became one totaling nearly four acres which was contained around 11:15 am.

Update 1pm: The CHP reports it could be several hours before the roadway is opened.

We would like to send a special thank you to Michael McEvoy for emailing us a picture of the fire.