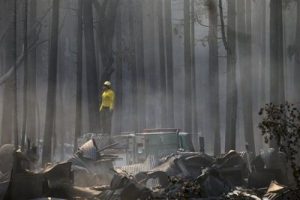 The Tuolumne County Visitor’s Bureau has been dealing with what Nancy Sikes describes as a “double whammy”.

Sikes, Executive Director for the TCVB, was Friday’s KVML “Newsmaker of the Day”.

“First it was the Rim Fire and now it is the Federal Government shutdown,” said Sikes. “Over the past month and a half, tourism in our county has been impacted hard by two major events.”

The Rim Fire closed Highway 120, (the north entrance for Yosemite) for a large number of days and several potential tourists either cancelled or changed their plans over the three day Labor Day weekend.

Sikes explains, “Not only was immediate access cut off to Yosemite, but the largest wrong perception among potential tourists was that all of Tuolumne County was inaccessible and everything here had burned. We put out the word that our State Parks like Railtown 1897 and Columbia State Historic Park were open for business.”

Once the firefighters began to leave the area and the fire began to recede, that’s when Sikes said the sudden lack of tourists was most evident.

The “double whammy” portion now comes with the Federal Government shutdown that began earlier this week.

This means a shutdown of not only Yosemite National Park, but also the closure of campgrounds and numerous services in the Stanislaus National Forest.

“Unfortunately there are several people who are now confusing State Parks with National Parks,” said Sikes. “They think that the Federal Government has closed Columbia and Railtown 1897, in addition to Yosemite. We are having to fight that. This has been one of the most challenging times we’ve ever had regarding tourism in Tuolumne County.”

Sikes said that next Spring and Summer, the TCVB will promote the various and bountiful wildflowers that are anticipated as a result of the Rim Fire.