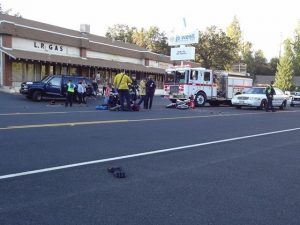 Sonora, CA — Police say the man suffered numerous broken bones in the crash on Stockton Road in Sonora. Emergency crews were called to Stockton Road near Ponderosa Way recently for a report of a vehicle versus motorcycle crash with injuries.

Sonora Police says 51-year-old Michael Cowley of Sonora was driving his Honda XR650 motorcycle westbound on Stockton Road when 42-year-old Katherine Allen of Sonora driving a Chevy Suburban pulled out in front of Cowley.
Investigators say Cowley didn’t have time to react. He smashed into the side of Allen’s SUV and was ejected from the bike. The force of the collision spun Allen’s vehicle around in the roadway.