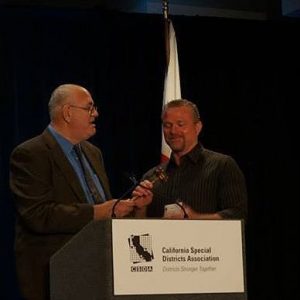 Sonora, CA — Pete Kampa will be taking on new responsibilities in addition to leading the Tuolumne Utilities District.

Kampa has been appointed President of the California Special Districts Association. The announcement was made at the CSDA conference in Monterey. Kampa previously served on the CSDA Executive Committee as Secretary of the Board.

“During my years of service on the CSDA Board, the association has implemented extremely successful special district education and legislative programs and other highly valuable membership resources,” says Kampa. “I believe I am the right person to help CSDA continue the positive progress toward providing the most affordable and best services possible, as well as the highest level of positive influence in the state Capitol.”

Kampa’s term as President will run from 2014-15. CSDA has over 1,000 members and is the only statewide association representing all special districts in California. Kampa is the General Manager of the Tuolumne Utilities District.