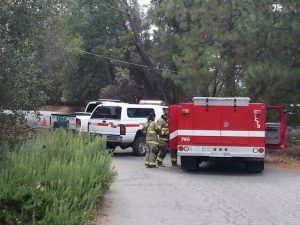 Phoenix Lake-Cedar Ridge, CA — Firefighters are heading to a structure fire in Tuolumne County. The blaze is on the 21-thousand block of Renee Court in the Phoenix Lake area behind the Phoenix Lake Golf Course. There is no word on what type of structure at this time. We will bring you more information when it is available.

To view a map of the fire area click here.

Update 1:15pm: Cal Fire reports additional crews have been called to the scene.

Update1:45pm: Cal Fire Capt. Mike Spear is on scene at the fire. He says it is a single family home that was fully engulfed in flames when crews arrived. Spear says, “There was one person in the home at the time the fire started. When Sheriff’s personnel arrived at the scene and located the person in the back of the home and had her get out.” There are no injuries. Also, live power lines are down at the scene and PG & E has been called to the scene to shut off the power. PG & E reports no outages in the area at this time.

Update 2pm: Both Cal Fire and Tuolumne County Fire Department are on scene. There are five engines and two water tenders on scene.

Update 3:30pm: Cal Fire reports PG & E has fixed the power hazard for firefighters. Family members of those in the home have arrived on scene. Cal Fire Capt. Mike Spear Spear says, “From what I can determine on scene is that the fire has destroyed the structure as well as the content in it. Crews will be on scene for several more hours mopping up and containing the structure.” The cause of the fire is still under investigation.