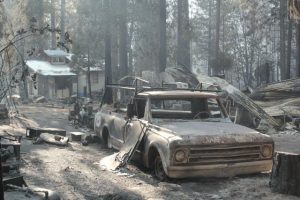 Sonora, CA — The Rim Fire is the hot topic for TuCARE’s 13th Annual Natural Resources Summit. A bonus this year will be a bus tour for some members of the group. The tour tthis Thursday will take them inside the Rim Fire boarders including roads that are closed off to the public. The group will also get to see some timber being salvaged from private forest lands.


TuCARE Executive Director Melinda Fleming says, “Sierra Pacific Industries started taking out wood from the forest last week so we be able to see some of those loads going out and then follow those to the mill. There we can see how they are able to salvage the remaining viable logs.” There will be several key note speakers on the bus including Tim Tate with SPI.

The summit will be held in the John Muir Building at the Mother Lode Fairgrounds in Sonora starting at 8am this Friday. The event is open to the public and admission is free. There will be plenty of information on natural resource provided by agencies, organizations and businesses. This year’s focus will revolve around restoration and recovery plans for affect areas of the Rim Fire,

“What we’re going to be learning about is how both public and private land will be completing restoration and regeneration projects. A lot of people know about restoring things but they don’t know necessarily the word regeneration which is a term for how to create vegetation again. In this instance, the Rim Fire, we are going to try to do it as quickly as possible,” says Fleming.

The Keynote speaker for the summit is Republican Congressman Tom McClintock. Other speakers include Dr. Roger Bales, UC Merced; Dan Tomacheski, VP Sierra Pacific Industries; Steven Brink, VP California Forestry Association. For more information on the tour and summit you can click here. The speaking portion of the summit kicks-off at 9:00 a.m. and runs till 1:00 p.m.