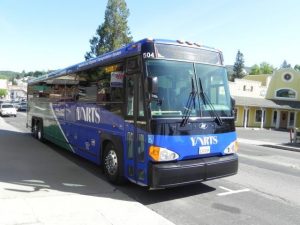 Yosemite, CA — Yosemite National Park Officials say the Rim Fire interrupted the Yosemite Area Regional Transportation System (YARTS) bus runs during the busy summer season so they want to make up for lost time. Sections of Highway 120 were shut down by the Rim Fire flames in August so now YARTS is extending its runs on Highway 120 west from Sonora and 120 East until the End of September. Both runs were scheduled to end on September 15th, but Highway 120 just reopened on September 14th.

Ranger Kari Cobb says, “The money that was allocated for YARTS was not spent during the closure so therefore some of that money is being saved and some is being used for the extension.”


This year marked the second year of YARTS service along the Highway 120 west corridor from Sonora. Dick Whittington, Transit Manager of YARTS says this run has proved to be very popular, with significantly increased ridership this year.

“We are thrilled to be able to resume and extend these YARTS runs until the end of the month. We are also grateful for the assistance from Yosemite National Park in helping us provide this expand services to the gateway communities,” said Whittington.

YARTS has been providing transit service to Yosemite National Park along the Highway 140 and Highway 120 east corridors since 2000.