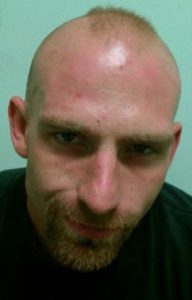 Sonora, CA — A man wanted in connection to a stolen vehicle in Calaveras County, and stolen guns in Tuolumne County, has been arrested in Sonora.

30-year-old Jay Whittle of Mi Wuk Village allegedly stole a Toyota Tundra in Murphys during the last week of August, and escaped by foot in the Arnold/White Pines region after being chased by law enforcement officials. Several firearms were found near the stolen vehicle, which officials learned had been stolen out of Tuolumne County. Click here to view an earlier story.

The Sonora Police Department reports that Whittle was at the Tuolumne County Transit bus stop in front of the Sonora Walmart this week and threatened to damage the bus unless he was given a free ride to Tuolumne City. When the driver refused, Whittle reportedly started yelling and made threats to start the bus on fire.

Police officers responded and tried to arrest Whittle, but he took off running over to the Radio Shack store. He ran into a back storage area and was trapped by officers. Whittle was then transported to county jail. Whittle already had a felony warrant for grand theft, auto theft, possession of stolen property, and other crimes.

The Police Department later reviewed surveillance video and saw that when Whittle took off running, two men picked up his backpack and walked away. They were identified as 33-year-old Joshua Murray of Jamestown, and 22-year-old Christopher Mills who does not have a permanent address. Murray was later tracked down by the Police Department and Whittle’s backpack was recovered. Murray faces charges related to aiding and abetting in the crime. Mills could not be located, but the Police Department notes that he already had two active warrants for his arrest. An investigation into the case is ongoing.