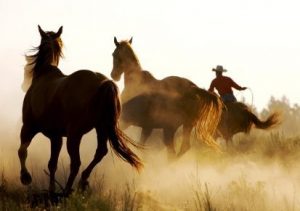 The Tuolumne County Sheriff’s Posse, along with the Oakdale Saddle Club, took in over forty horses during the Rim Fire Evacuation orders and advisories.

“There were about forty horses taken to the Posse Grounds in Jamestown,” said Job. “Volunteers were calling the Posse and offering to help transport horses, house horses on their property, feed them.. whatever needed to be done, people from all over the region were offering to help”.

With the Rim Fire no longer an immediate threat and due to the outpouring of community help and volunteers, the Posse members would now like to both thank the entire community and celebrate a successful effort.

The Posse has set their eyes on the weekend of October 19th and 20th.

The annual Poker Ride (horseback) will be much larger this year than in past years. In addition to the Ride itself, there will be now be a hamburger dinner, a Mother Lode Round-Up Queen Reunion and an evening dance all at the Posse Grounds on Saturday night October 19th.

Attendees are invited to spend the night at the grounds (tents, motorhomes, sleeping bags in the back of pick-up beds, etc.) and wake up to a boy scout served pancake breakfast on the morning of Sunday October 20th. There will be arena riding, barrel racing and other events planned as well.

The entire weekend of fundraising events and the community celebration is still being put together and finalized. For more information, call (209) 559-1323.