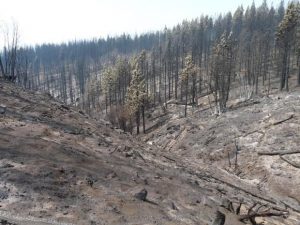 Tuolumne County, CA — The BAER Team that is leading the restoration effort in the Stanislaus National Forest, post Rim Fire, says the damage to the soil could have been much worse.

56% of the soil in the perimeter of the Rim Fire is either unburned or received a low severity burn, 37% received a burn of moderate severity and 7% was burned to a high severity.

Information provided by the team says, “BAER Specialists concluded that the amount of high severity burn is fairly low given time of year and comparison to other fires.”

7% is still a significant area though, as it represents 28 square miles.

The BAER Team is studying the burned out area to predict what type of post-fire water runoff and erosion may occur over the coming winter months. Emergency stabilization treatments are expected to begin this week. The BAER Team anticipates presenting its full assessment to Stanislaus National Forest Supervisor Susan Skalski on September 25.