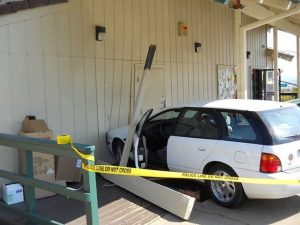 Sonora, CA – An elderly woman hits the gas instead of the brake and smashed into a Sonora business. The crash happened at 2:36 this afternoon at the Bob’s Greenley Pharmacy on the 800 block of Delnero Drive. When Sonora Police Officers arrived they found a 2000 Saturn station-wagon smashed into the northwest side of the building. The car had also hit a support pole for an awning causing it to sag. Officers say 92-year-old Gertrude Fueg told them she accidentally stepped on the gas pedal when she meant to hit the brakes.


Police say the building had major damage. Fueg’s car had moderate damage and had to be towed. Luckily, no one was injured in the accident.