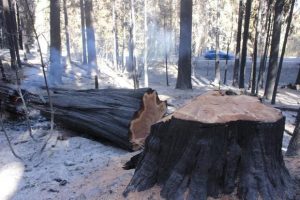 Last night crews carried out a small planned burnout operation near Hetch-Hetchy in order to secure the fire perimeter and protect structures. Numerous spot fires were detected outside the existing containment lines, and the largest in that area was about a quarter-acre. Today officials will continue to look for spot fires that jumped containment lines. Over the weekend there were some spot fires near the Highway 108 corridor, but all were contained with resources on scene. The largest was a four acre fire near Long Barn. There are no evacuation advisories in that region.

The Incident Command reports that nearly 1,900 structures are still considered threatened. Highway 120 is back open between Groveland and Yosemite National Park. Tioga Pass is closed from Crane Flat to White Wolf.