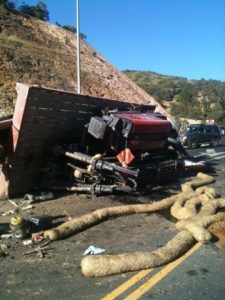 Sonora, CA — The CHP has released more details on a roll over wreck in Sonora that had traffic backed up for two hours Friday. The traffic jam began after the driver of a2008 Kenworth semi pulling a trailer flipped while attempting to turn from Stockton Street/Highway 49 onto Highway 108.

The CHP says the 42-year-old driver from Calexico, California was going at an unsafe speed when he tried to make the turn and overturned. They say the weight of a large directional boring drill used in road construction caused the trailer to flip. The trailer and a 50 to 100 foot oil spill on the southbound lane of Highway 108/49 had traffic backed up to the Lime Kiln Road intersection for about two hours.

Initially officers let vehicles go around the accident on the shoulder, but then closed down the intersection for about 30 minutes to upright the trailer and clean up the oil slick. The intersection opened back up after 7pm. There were no injuries in the crash. The CHP says drugs and alcohol were not factors in the wreck.