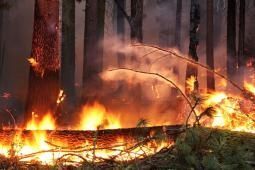 The fire is listed as 80% contained, and it is up to 246,350 acres. There were several spot fires near the northern flank yesterday afternoon. There were also some planned burnout operations in that area which caused heavy smoke.

Officials are still estimating that the fire will be fully contained on September 20th. The Forest Service says the Rim Fire was started by an unidentified hunter that allowed an illegal fire to get out of control.

3,634 firefighters are on scene this morning. Highway 120 remains closed from Buck Meadows to 1 ½ miles east of White Wolf.

The Rim Fire passed the 2007 Zaca Fire in Santa Barbara County to become the third largest in state history. The fire that burned the most acreage was the Cedar Fire in San Diego County, at 273,246.