No Growth On Rim Fire 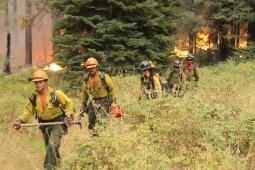 Tuolumne County, CA — Incident Command reports no growth on the Rim Fire, due to problem with the infrared plane that had mechanical difficulties last night. They say they hope to have a better gauge on the acreage once that plane take off tonight.  The Rim Fire still stands at 237,341 acres or 371 square miles and 80% contained. The number of firefighters battling the blaze has dropped to 3,634 and there have now been 6 injuries, all minor. The cost to fight the flames is up to $84.8 million. Highway 120 at the Yosemite National Park boundary west to Buck Meadows remains the only area under an evacuation order.

Fire activity increased within containment lines in unburned portions of the Rim Fire area on Thursday. There was limited spotting of embers across fire lines on the fire’s northern flank in the area of Clavey Meadow, and on the southern flank along Tioga Road. Firefighters are having success containing these spot fires. Burnout operations along Tioga Road were completed today. Hot and dry weather accompanied by gusty south and southeast winds are expected to persist through the weekend. Tonight’s operations will focus on containing the spot fires, improving control lines and closely monitoring fire behavior.

One note, if you noticed a big plume of smoke near Twain Harte this afternoon, I.C. confirmed it was not a new fire, but a spot fire that ignited vegetation inside the containment lines.