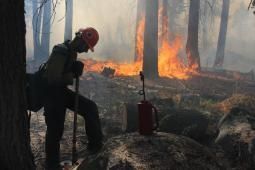 Tuolumne County, CA — The Rim Fire numbers hold at 237,341 acres or 371 square miles and it is still 80% contained. Incident Command says while the numbers for the fire remained steady the number of structures threatened has decreased from 4,500 to 2,495. They attribute that to the containment lines working along the Highway 108 corridor which has allowed  the communities near the south side of the highway to be taken off the danger list. Also, the number of firefighters battling the blaze has continued to drop to 3,975. However, the cost to fight the flames has soared to $81 million.

Successful firing operations continued today on the fire’s southeast and northeast flanks, including north of the Tioga Road. Tonight’s shift will focus on continuing today’s firing operations. Slow humidity recovery and light southeasterly winds this evening and into the night are expected to aid firefighters in completing safe firing operations. On the west and north flanks, crews continue to patrol fires lines and locate and extinguish any remaining heat. California Interagency Incident Management Team 1 assumed command of the Rim Fire at 6 AM this morning.

There are currently no mandatory or advisory evacuation orders effective in Mariposa or Tuolumne Counties, however there are roads that remain closed. Highway 120 at the Yosemite National Park boundary west to Buck Meadows has been evacuated.