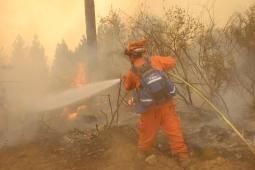 Tuolumne County, CA — The Rim Fire continues to rack up new titles as it has grown to 237, 341acres.

Here are the latest facts released by Incident Command:

States that have sent firefighters or other personnel: 44 and the District of Columbia

Cal Fire geographical units that have sent personnel: 20 of 21

Inmate personnel from the California Department of Corrections and Rehabilitation: 746

Proportion of inmate personnel working on the fire: 17.1 percent

Rim Fire acres as a proportion of burned acres in California:
47.8 percent

Proportion of the fire burning in Yosemite National Park: 28 percent

Proportion of Yosemite National Park within the fire perimeter: 8.7 percent

Size of the fire area:
More than five times the size of Washington, D.C.

Origin of Rim Fire name: The fire started near a scenic overlook in Stanislaus National Forest called “Rim of the World”