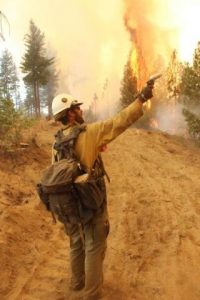 The Rim fire’s west and north flanks are considered contained while firefighters continue to monitor for spot fires and heat found near containment lines. The Rim Fire’s southeast flank in Yosemite National Park is expected to remain active where unburned fuels remain between containment lines and the fire. Crews are constructing new line off the Tioga Road in an effort to reduce the amount of fire operations needed to contain the fire. As conditions are favorable crews will continue using firing operations to remove unburned fuels that could threaten containment lines on the fire’s south and northeast flanks. Weather conditions are expected to be similar to yesterday with slightly drier conditions. Smoke exposure and air quality will continue to be a concern to the public and fire crew. California Interagency Incident Management Team 1 (McGowan) assumed command of the Rim Fire at 6 AM this morning.

As of Noon Tuesday, all advisory evacuation notices along the Highway 108 Corridor had been lifted. That includes Ponderosa Hills and the south side of Highway 108 from North Tuolumne Road up to Pinecrest. There are currently NO mandatory or advisory evacuation orders effective in Mariposa County. Highway 120 at the Yosemite National Park boundary west to Buck Meadows remains under evacuation.