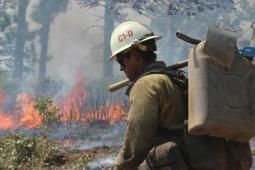 Tuolumne County, CA — The Rim Fire has now burned 235,841 acres or 368 square miles and is 70% contained. The number of firefighters on scene has fallen to 4,330. The total cost to combat the flames has jumped to $72 million.


Ponderosa Hills and the south side of Highway 108 from North Tuolumne Road up to Pinecrest remain under an advisory evacuation. Highway 120 at the Yosemite National Park boundary west to Buck Meadows has been evacuated.

Very active fire behavior was observed today on the south and east fire perimeters. Types of fire seen today included running ground fire, group tree torching, short crown runs, and spotting. In the north and west fire perimeter moderate rates of spread were observed both in advancing ground fire, and burnout operations. Good progress was made with burnout operations in the north and southeast sections. Reliance on aviation resources has been critical in an effort to slow the fires progress to allow suppression resources to establish control lines in areas where accessibility and safety can be achieved. The extremely dry fuels, high winds, and potential for long-range spotting remain a significant concern for the fire to advance beyond control lines.

Incident Command estimates it will have conatainment on the Rim Fire by Sunday, September 20th.